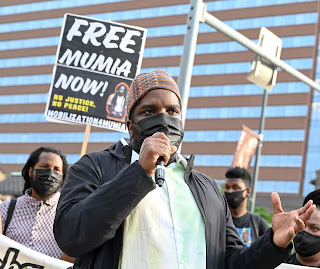 Abdul-Aliy Abdullah Muhammad is an organizer and writer from West Philadelphia. They are also a cofounder of the Black and Brown Workers Co-op, a workers’ rights organization that focuses on Black and Brown people with special concern for LGBTQI communities, disabled communities and communities living with HIV and other chronic illnesses.

In their writing they often problematize medical surveillance, the tracking of people through data and other methods. You can follow them on twitter @mxabdulaliy.

Jamal Journal:  We want to discuss your recent Philadelphia Inquirer articles that broke the story about the UPenn Museum’s desecration of the remains of Tree and Delisha Africa, but let’s first begin with a focus on the story you were actually in the process of investigating when you first learned about the MOVE children’s bones. Can you please begin by explaining who Samuel Morton was, and why the UPenn Museum has chosen to archive and present his work?

Abdul-Aliy Muhammad:  Sure, Samuel G. Morton is a white supremacist alum of UPenn, he was a proctor in the early formation of what is now Penn’s School of Medicine.

He was an early purveyor of racial difference and his pseudo-science has harmed marginalized communities. For more information on Morton please visit the Penn & Slavery Project (www.pennandslaveryproject.org)

JJ:  What was the story that you were investigating about the UPenn Museum? How did UPenn respond to your article?

AAM:  I wrote an Op-Ed about Penn Museum’s possession of 14 crania belonging to Black Philadelphians, this was discussed in a research paper written by Paul Wolff Mitchell, a   doctoral student at the University. I restated the demand of mine, which was expanded by Police Free Penn, an  abolitionist assembly.

During the uprising, Penn Museum created a committee to consider repatriation and reburial. After the Op-Ed came out, the museum responded by releasing the recommendations and decisions the committee came to. They said they intend to repatriate the remains of the Black Philadelphians and other remains.

JJ:  Let’s examine more generally how UPenn has dealt with Morton’s white supremacist legacy and his significant contributions to the field of scientific racism in the United States.

Monge and Renschler write that because of his “genial personality and stature as a member of the Academy of Natural Sciences, Morton was able to correspond with leading scientists all over the world—a key factor in the development of his collection and scholarly contributions...Indeed, the endeavor was so significant that army surgeons stationed in remote areas of the world would take great risks to obtain crania for Morton, and they were not above robbing graves in order to do so!…Each shipment of crania had its own unique story, often connected to dramatic historical events…For example, one man assigned to the U.S. Army in Florida picked over the dead of the Seminole war, sending Morton two ‘fine’ Seminole skulls left unburied after the battle of Lake Okee-Chobee, while another contact happily forwarded Morton the heads of four of the 630 Mexican soldiers killed in 1836 during the battle of San Jacinto fought between troops of the Mexican General Santa Anna and the Texan Sam Houston....in 1892 the Academy sent 44 of the Native American crania to Spain for the 400th anniversary of Columbus’s discovery of the New World.”

What does this 2008 article tell us about UPenn’s attitude towards Morton and the human skulls that he has collected?

AAM:  I think it is deplorable that collecting skulls of indigenous people who died as a result of brutal genocide is being framed as exotic. Calling the Seminole crania “fine” is disgusting.

This kind of thinking speaks to the inhumanity of many people who hold on to his legacy as good or correct.

JJ:  Now, can you please explain to us how you first learned about Delisha and Tree Africa’s remains being held at the UPenn Museum, and used in a Princeton class taught by Janet Monge, the co-author of the article cited above?

AAM:  I first heard of the remains of Tree and Delisha from Amy Sadao, the former director of the Institute for Contemporary Art, a Penn institution. She emailed me to set up a zoom call and on that call, which took place on April 17, 2021. I learned that Amy had known for a good while that Penn Museum held the remains of MOVE bombing victims.

I began the process of investigating this immediately after, but I first made contact with someone who knows MOVE members to get information to the family immediately.

JJ:  Have you also conducted any new research into the May 13, 1985 massacre itself?

AAM:  I’m in the process of investigating more about the day of the state-sanctioned murder of 11 Black people on May 13, 1985.

What is clear to me is that this was deliberate, planned and that a cover-up ensued following the bombing. The Medical Examiner’s Office allowed for the systematic desecration of bodily remains and the city still possesses potentially up to 6 people’s remains. We don’t know because the investigation is still ongoing.

The University of Pennsylvania and Princeton University allowed for bodily remains to be used as instructional devices and they did not have the consent of the family, who thought their loved ones were buried in 1985 and 1986.

Additionally, the Police Department experimented with bomb-making for 18 months before the assault on May 13th.

JJ:  You were born and raised in West Philadelphia. What impact did the May 13, 1985 massacre have upon your childhood, and upon your neighborhood when you were growing up?

AAM:  I’m from West Philadelphia all day! I was born to two Black Muslim parents moving from Farson Street, near 52nd and Market to 50th and Pentridge Street, which is technically in Southwest Philly, when I was around 9 years old..

My mother is from West Philadelphia, and when I was younger she’d tell me about the devastation the bombing caused on her mind and spirit.

I was a year and 6 months old when the bombing took place and I don’t have any direct memory of it.

JJ:  How and when did you first learn about Mumia Abu-Jamal?

AAM:  I learned about Mumia Abu Jamal pretty early in my consciousness and have been following his work, reading his words, and showing up to Free Mumia events over the years. I once saw a spray-painted mural calling for Mumia’s release in Berlin, Germany, while I lived there in the early 2000s.

AAM:  No Justice, No Peace, Take it to the streets!!