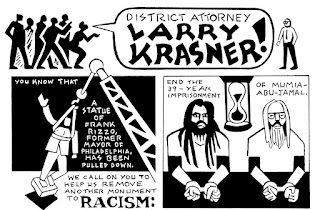 “Chobert told me that on December 9, 1981, he had actually been parked, in his taxi, on 13th Street, north of Locust. (This contradicted his trial testimony that he was parked behind Officer Faulkner’s police car on Locust St., east of 13th Street.) Chobert told me that he did not see anyone standing over a prone Officer Faulkner, firing shots at the officer. Chobert said that what actually happened was that he was sitting in his taxi when he heard gunfire. He exited the taxi and saw a Black male standing next to a police car that was parked on Locust, east of 13th Street. The Black male slumped down. Chobert walked toward that area and when he got closer saw a police officer sprawled on his back on the sidewalk and a Black male sitting nearby. (This contradicted Chobert’s trial testimony that he saw Mumia Abu-Jamal standing over a prone Officer Faulkner and firing shots at him.)" --Excerpted from the 2001 affidavit by George Michael Newman, regarding his 1995 interview with Robert Chobert while working as an investigator for Mumia Abu-Jamal's defense team.

Judge Sabo justified this by ruling that Chobert’s offense was not crimen falsi, i.e., a crime of deception. Consequently, the jury never heard about this, nor that on the night of Abu-Jamal’s arrest, Chobert had been illegally driving on a suspended license (revoked for a DWI). This probation violation could have given him up to 30 years in prison, so he was extremely vulnerable to pressure from the police.

Notably, at the later 1995 PCRA hearing, Chobert testified that his probation had never been revoked, even though he continued to drive his taxi illegally through 1995.

At the 1982 trial, Chobert testified that he was in his taxi, which he had parked directly behind Faulkner’s police car, and was writing in his log book when he heard the first gunshot and looked up. Chobert alleged that while he did not see a gun in Abu-Jamal’s hand, nor a muzzle flash, he did see Abu-Jamal standing over Faulkner, saw Abu-Jamal’s hand “jerk back” several times, and heard shots after each “jerk.” After the shooting, Chobert stated that he got out and approached the scene.

Damaging Chobert’s credibility, however, is evidence suggesting that Chobert may have lied about his location at the time of Faulkner’s death. As displayed on page 37, the newly discovered Polakoff crime scene photos show that the space where   Chobert testified to being parked directly behind Officer Faulkner’s car was actually empty.

Yet even more evidence suggests he lied about his location. While prosecution eyewitness Cynthia White is the only witness to testify seeing Chobert’s taxi parked behind Faulkner’s police car, no official eyewitness reported seeing White at the scene. Furthermore, Chobert’s taxi is missing both from White’s first sketch of the crime scene given to police (Defense Exhibit D-12) and from a later one (Prosecution Exhibit C-35).

In a 2001 affidavit, private investigator George Michael Newman says that in a 1995 interview, Chobert told Newman that Chobert was actually parked around the corner, on 13th Street, north of Locust Street, and did not even see the shooting.

Amnesty International documents that both Chobert and White “altered their descriptions of what they saw, in ways that supported the prosecution’s version of events.” Chobert first told police that the shooter simply “ran away,” but after he had identified Abu-Jamal at the scene, he said the shooter had run away 30 to 35 “steps” before he was caught. At trial, Chobert changed this distance to 10 “feet,” which was closer to the official police account that Abu-Jamal was found just a few feet away from  Officer Faulkner.

Nevertheless, Chobert did stick to a few statements in his trial testimony that contradicted the prosecution’s scenario. For example, Chobert declared that he did not see the apparently unrelated Ford car that, according to official reports, was parked in front of Billy Cook’s VW. Chobert also claimed that the altercation happened behind Cook’s VW (it officially happened in front of Cook’s VW), that Chobert did not see Abu-Jamal get shot or see Officer Faulkner fire his gun, and that the shooter was “heavyset” – estimating 200-225 pounds. Abu-Jamal weighed 170 pounds.

In his 2003 book, “Killing Time,” Dave Lindorff wrote about two other problems with Chobert’s account. While being so legally vulnerable, why would Chobert have parked directly behind a police car? Why would he have left his car and approached the scene if in fact the shooter were still there? Lindorff suggests that “at the time of the incident, Chobert might not have thought that the man slumped on the curb was the shooter,” because “in his initial Dec. 9 statement to police investigators, Chobert had said that he saw ‘another man’ who ‘ran away’ … He claimed in his statement that police stopped that man, but that he didn’t see him later.”

Therefore, “if Chobert did think he saw the shooter run away, it might well explain why he would have felt safe walking up to the scene of the shooting as he said he did, before the arrival of police,” writes author Dave Lindorff. 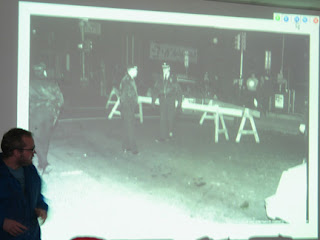 (PHOTO:  On December 8, 2007, Journalists for Mumia presented Pedro Polakoff's crime scene photo of the empty space behind Officer Daniel Faulkner's police car, where Chobert testified that he was parked when he observed the shooting.)