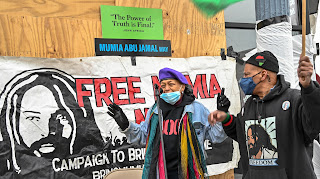 The murder of Philadelphia Police Officer Daniel Faulkner is a crime I’ve reported on, researched and monitored since its occurrence in the pre-dawn hours of Wednesday December 9, 1981.

Thirty-seven years after Faulkner’s murder, in December 2018, Philadelphia prosecutors stumbled across six boxes stashed in a forgotten area in their office complex that contained startling evidence related to the man convicted of Faulkner’s murder.

For me, the discovery of those boxes provided both confirmation and consternation.

The law required prosecutors to provide items in those boxes to Abu-Jamal’s lawyer before the 1982 trial that sent Abu-Jamal to death row. Abu-Jamal spent thirty-years on death row before conversion of his sentence to life-in-prison.

Given the fact that my deep dives into Abu-Jamal’s case have plunged me through an ooze of illegal conduct against Abu-Jamal by prosecutors, police and judges, this act of prosecutors disappearing boxes that contain evidence of innocence provided additional confirmation of injustices endured by Abu-Jamal.

The consternation for me from those boxes came from the contents in one box.

Documents in that box documented that authorities involved in keeping Abu-Jamal imprisoned conducted a criminal background check on me in 2001. Authorities conducted that check in their attempt to dig up dirt they hoped could discredit my reportage on their misconduct.

I caption my reaction to this malicious criminal background check as consternation because such slime-ball action was not surprising considering the record of misconduct by authorities since the December 1981 arrest of Abu-Jamal.

One document in those rediscovered boxes is a letter from a prime witness for the prosecution during Abu-Jamal’s 1982 trial. That witness wrote that letter to the trial prosecution shortly after Abu-Jamal’s conviction asking a single question: “…where’s my money?”

One logical question from that ‘where’s-my-money’ inquiry is: was that witness promised payment by prosecutors to testify against Abu-Jamal?

That witness, a cab driver named Chobert, was driving his cab on December 9, 1981 without a valid driver’s license because of a suspension of that license for drunk driving. At the time when Chobert said he saw Abu-Jamal shoot Faulkner, Chobert was on probation for tossing a firebomb into a school building.

Given the fact that Chobert was illegally operating a cab while on probation, it’s unlikely that he would casually park his cab behind a police car then engaged in enforcement.

Did Philadelphia police tampered with evidence by removing Chobert’s cab from the crime scene before photos were taken? Or was Chobert never parked behind Faulkner’s car thus making his trial testimony a lie?

Inside one of those rediscovered boxes is a report from a policeman who stated a police lieutenant ordered him to ride along with the “cab driver” to the homicide division where detectives interviewed the cab driver. Chobert is the only cab driver referenced in the Abu-Jamal case.

The jury that convicted Abu-Jamal in 1982 never heard of Chobert’s illegal driving, his probation status or that fact that he faced 5-7-years in prison if authorities revoked his probation for illegal conduct…like driving on a suspended license. (Staying out of prison is strong incentive to provide false testimony with or without receiving money for that false testimony.)

The judge at Abu-Jamal’s 1982 trial specifically blocked the jury from hearing about Chobert’s criminal background. That same judge, Albert Sabo, during a pivotal 1995 appeals hearing came to Chobert’s defense again.

“Cleary the fact that Chobert at least believed that [the prosecutor] was going to “look into” getting his license back should or could have led some jurors to suspect that his subsequent testimony about what he alleged to have seen Mumia do was designed to get him his license back,” investigative reporter Dave Lindorff observed. Lindorff is the author of Killing Time: An Investigation into the Death Row Case of Mumia Abu-Jamal, the first independent and still most comprehensive examination of the Abu-Jamal case.

Judge Sabo, before the start of the 1982 trial, declared he would help prosecutors “fry the nigger” according to a person who overheard that bigoted, fair-trial-rights violating declaration.

The obvious misconduct in Chobert’s obviously tainted trial testimony and the equally outrageous misconduct of racist Judge Sabo have both been ruled legally proper by state and federal courts. Those rulings evidence anti-Abu-Jamal postures from police up through the highest appellate courts, including the Supreme Courts of Pennsylvania and the United States.

As an Amnesty International report on the Abu-Jamal case released in 2000 noted, “The record in this case indicates a pattern of events that compromised Abu-Jamal’s right to a fair trial, including irregularities in the police investigation and the prosecution’s presentation of the case [plus] the appearance of judicial bias…”

Earlier this year, the Supreme Court of Pennsylvania erected another roadblock to Abu-Jamal’s latest appeal. That Court granted an unusual delay in the appeal process requested by long-time enemies of Abu-Jamal: Philadelphia’s police union and the remarried widow of Officer Faulkner.

Those enemies want the removal of Philadelphia’s DA Office from Abu-Jamal’s current appeal on the specious claim that Philadelphia prosecutors were not vigorous enough in opposing Abu-Jamal’s quest for justice.*

Philly’s current prosecutors have battled against Abu-Jamal’s appeal. However, those prosecutors have not engaged in unprofessional and illegal antics [misconduct] to keep Abu-Jamal incarcerated like their predecessors. That no misconduct stance, while legally proper, seemingly irritates Abu-Jamal’s enemies.

Misconduct by members of Pa’ Supreme Court in legal proceedings involving Abu-Jamal is a key element in his now stalled appeal.

For example, during an important 1998 ruling upholding Abu-Jamal’s conviction, five of the seven Pa Supreme Court members on that unanimous decision had received political contributions and other campaign assistance from police organizations then seeking Abu-Jamal’s execution. One of those five – Ronald Castille – was Philadelphia’s former DA who battled to keep Abu-Jamal on death row.

Having five members of a seven member Supreme Court arguably in the pocket of enemies of Abu-Jamal makes a farce of the fundamental fairness all defendants are supposed to receive from judges.

That 1998 involvement of DA turned Justice Castille violated provisions of Pennsylvania’s Code of Judicial Conduct that was in force in 1998. Further, in 2016, the U.S. Supreme Court blasted Castille for his legally improper dual DA/Justice role in another Philadelphia death penalty case.

Based on the legal precedent of that U.S. Supreme Court ruling, the involvement of Castille in Abu-Jamal’s appeals should be automatic grounds for relief if the Pa Supreme Court was not institutionally biased against Abu-Jamal.

As acclaimed activist, Angela Davis, noted during a press conference on the Mumia case in mid-November, “The framing of Mumia and his repression is part of a wider story of structural racism and police brutality.”

For many Faulkner’s murder is a case closed 39-years ago with the conviction of Abu-Jamal.

However, millions around the world view the conviction of Abu-Jamal as classic and continuing injustice. 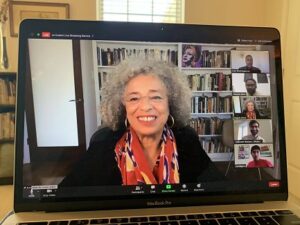 (PHOTO: Former political prisoner Angela Y. Davis speaks in support of Mumia Abu-Jamal at a Nov.16, 2020 video press conference. Professor Davis concluded her speech by saying  "Finally at a time when critiques of structural racism are gaining traction. And specifically its centrality to policing. We gather here to demand the release of Mumia Abu-Jamal and other political prisoners whose trials and sentences were irreparably influenced by their political beliefs and by their challenges to this very system." Photo by LBW, thiscantbehappening.net)