Even Before Linn Washington Jr. and Dave Lindorff's 2010 Ballistics Test, There Were Already Serious Problems With the Ballistics Evidence Used to Convict Mumia Abu-Jamal

The 2010 ballistics test performed by investigative journalists Linn Washington Jr. and Dave Lindorff physically proved that the trial testimony of prosecution eyewitnesses Robert Chobert and Cynthia White was a lie. Lindorff and Washington concluded that “the whole prosecution story of an execution-style slaying of the officer by Abu-Jamal would appear to be a prosecution fabrication, complete with coached, perjured witnesses, undermining the integrity and fairness of the entire trial.”

Even before this 2010 test, there were other well-documented problems with the ballistics evidence.

The facts of the Mumia Abu-Jamal/Daniel Faulkner case are highly contested, but all sides agree on certain key points: Abu-Jamal was moonlighting as a taxi-driver on Dec. 9, 1981, when, shortly before 4 a.m., he saw his brother, William “Billy” Cook, in an altercation with Officer Faulkner after Faulkner had pulled over Cook’s car at the corner of 13th and Locust streets, downtown Philadelphia. Billy Cook was bleeding from a large gash on his head after having been struck by Officer Faulkner's police flashlight.

Mumia approached the scene. Minutes later when police arrived, Faulkner had been shot dead, and Mumia had been shot in the chest.

The arresting officers claimed that when they arrived at the scene, Mumia’s legally registered .38 caliber, Charter Arms revolver (which Mumia says he carried while driving his taxi, after he was robbed several times on the job) was laying at his side with five spent cartridges.

Police never officially performed the standard “wipe test” for gunshot residue on Mumia’s hands and clothing, or the “smell test” on his gun, which Amnesty International has criticized as “deeply troubling.”  J. Patrick O’Connor, author of The Framing of Mumia Abu-Jamal, writes that these tests “are so routine at murder scenes that it is almost inconceivable the police did not run them. It is more likely that they did not like the results.”

The original medical examiner’s report (never seen by the 1982 jury) stated that the deadly bullet was a .44 caliber. Later, police ballistician Anthony Paul concluded that the bullet was actually a .38 caliber.

Veteran Philadelphia journalist and Temple University professor, Linn Washington Jr, argues that the .44 caliber notation “is significant in showing the shallowness of the case against Abu-Jamal. A .44-caliber magnum bullet is more than twice the size of a .38-caliber bullet. This size difference between these two bullets is clear to the naked eye of anyone irrespective of their level of understanding of bullets and/or ballistics. Remember, in Philadelphia, Medical Examiners perform hundreds of gun shot death autopsies annually, constantly seeing various size bullets, thus being easily able to identify bullets.”

Even if the medical examiner actually made a legitimate mistake, the evidence presented about the alleged .38 bullet is also contradictory and inconclusive. “Particular rifling traits” identify a bullet as coming from one specific gun. Police experts concluded that the fatal bullet was too damaged to link the particular traits to Mumia’s gun.

General traits can only link a bullet to a particular type of gun. In his report, police ballistician Anthony Paul first identified the bullet’s general traits as “indeterminable.”

Contradicting himself in the same report, Paul later noted a general trait: a “right-hand direction of twist.” Then, Paul’s 1982 trial testimony went even further by identifying another general trait never mentioned in his written report: “8 lands and 8 grooves.” So after deeming the general traits indeterminable, Paul then alleged two general traits that served to further implicate Mumia’s gun type.

Even if these general traits cited by Anthony Paul did exist on the bullet, it was still not a reliable link to Mumia’s gun. Paul was asked at the 1982 trial, “approximately, how many millions of guns have eight lands and grooves and how many would provide this bullet?” Paul answered that it could have come from “multiples of millions,” of guns, including guns not manufactured by Charter Arms.

The Behavior of an Innocent Man

In 2001, Mumia’s defense filed two affidavits demanding that the fatal bullet be retested by modern methods to determine whether it came from Abu-Jamal’s gun. In one affidavit, medical examiner Robert H. Kirschner states: “Newer technology may provide evidence as to the class or individual characteristics of the bullet specimen recovered from Officer Faulkner permitting a determination of whether or not it was fired from the recovered Charter Arms revolver.” Would a guilty man have called for a new ballistics analysis of the fatal bullet?

At the 1982 trial, the prosecution argued that Mumia had been shot in the chest from below by a falling Officer Faulkner. However, the bullet (officially linked directly to Faulkner’s gun) entered Mumia’s chest at a downward trajectory, suggesting that he was actually shot from above. Attempting to explain the bullet’s problematic downward trajectory, the prosecution claimed that the bullet ricocheted off bone within Mumia’s torso and then tumbled downward.

Challenging this far-fetched theory, medical examiner John Hayes testified at the 1995 PCRA hearings, that x-rays proved the bullet traveled without any deflection.

This downward trajectory strongly suggests that Abu-Jamal was actually shot while running, bent slightly forward, from across the street towards Faulkner, who was standing above, on the curb.

The bullet shot into Faulkner’s back traveled upwards at a 33 degree angle, exiting below his throat. This bullet has never been definitively recovered. In fact, neither the bullet, copper bullet jacket, or bullet fragments found at the scene (as shown in the diagrams on the left) were definitively tied to either Faulkner’s gun or Abu-Jamal’s gun.

German author Michael Schiffmann argues in his 2006 book, Race Against Death, that only the small bullet fragment found inside the 1234 Locust vestibule (weighing 39.4 grains) could have possibly related to the shot through Faulkner’s back. Notably, this fragment traveled southwest, in sharp contrast to the southeast direction of Mumia’s likely approach.

Furthermore, there were no bullets or fragments found east down Locust--where it would have been had Mumia shot Faulkner in the direction he was likely approaching. Thus, Schiffmann writes with “a certainty of almost 100 percent” that Mumia did not fire the shot into Faulkner’s back.

Schiffmann concludes that the bullet was actually fired by a third person, who was on the curb, behind Faulkner, as Faulkner faced northwest towards Mumia.

Schiffmann argues that this “third person” was Billy Cook’s friend and business partner, named Kenneth Freeman, who was in Cook’s car when it was pulled over, and who shot Faulkner in response to Faulkner first shooting Mumia. 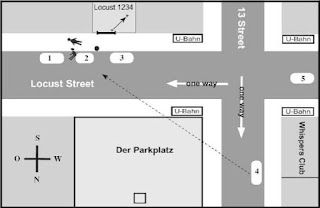 (Short Arrow at 1234 Locust) The trajectory of the bullet fragment weighing 39.4 grains, inside the vestibule. The trajectory is based upon the alignment of the hole in the glass where the bullet entered and where it stopped in the wall.

ANALYSIS: Mumia’s direction is in contradiction to the bullet trajectory and the fragments found in the wall. Officer Faulkner was more likely shot in the back by someone standing on the curb, behind Faulkner, near Billy Cook’s car, with the bullet traveling North, away from 1234 Locust, after exiting Officer Faulkner’s body.

The “X”-Marks, From Left to Right:

X: One whole bullet found in frame of entrance door

X: Entry location of bullet fragment found inside the vestibule of 1234 Locust