Mumia Abu-Jamal FAQ: The Voice of the Voiceless (written by the Campaign to Bring Mumia Home) 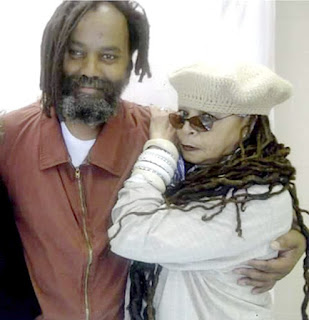 (PHOTO: Mumia with his wife Wadiya, shortly after being removed from death row in 2012.)

Mumia is a revolutionary journalist. He has been writing since age 15, first as Minister of Information for the Philadelphia chapter of the Black Panther Party (1969-1971), then for numerous Philadelphia radio and print venues, including National Public Radio.

His journalism was featured in mainstream venues, but he refused to forget those whom corporate media routinely neglect. He was especially noted for covering police harassment of the MOVE organization, while other journalists ignored it.

His writings, today, after 39 years in prison, now fill twelve books and thousands of radio and print columns in publications ranging from homeless “street news” papers to Forbes magazine and the Yale Law Review.

Mumia was confined for three decades on Pennsylvania’s death row before federal courts ruled “unconstitutional” the death sentence he received at age 27 for the shooting death of Philadelphia police officer, Daniel Faulkner.  He now is serving a “Life Without Parole” sentence in Pennsylvania’s general prison population.

Mumia is The United States’ Most Internationally Renowned Political Prisoner

Mumia is known worldwide as a political prisoner, because of the political context of his arrest, sentencing and imprisonment.

He was arrested, tried, convicted and sentenced in the era of rampant police brutality, and also of activists’ resistance, under former Philadelphia Mayor Frank Rizzo.

In that period, Mumia uncompromisingly reported on police brutality and racism, exposing officials’ brutal assaults on the MOVE family & organization, and on other national and international revolutionary movements.

When he was found already shot at the scene of Officer Faulkner’s shooting, police brutally beat Mumia beyond recognition, then charged him with the officer’s shooting. He has been imprisoned ever since, on the basis of a trial that systematically denied him due process, involving prosecutors’ withholding of evidence, racial bias in juror selection, and a judge’s rampant bias.

Further, higher courts have routinely rejected Mumia’s numerous appeals on the basis of exceptional rulings that denied him the courtesy of court precedents that often were extended to others who lodged the same appeals on the same grounds.

Mumia is a Framed Man

A charge of killing a police officer is the hardest rap to beat, even when innocent, especially for a revolutionary activist of color. Nevertheless, the arguments for Mumia’s innocence are some of the strongest that can be made. He has maintained his innocence from the very beginning and to this day. Independent journalists researching his case have set forth cogent grounds that Abu-Jamal was framed (e.g. Patrick O’Connor, The Framing of Mumia Abu-Jamal, 2008).

Amnesty International, in its extensive analysis of the case in 2000, called for “a new trial,” holding that the original trial “was irredeemably tainted by politics and race and failed to meet international fair trial standards.”

Even a lawyer writing for the mainstream American Lawyer magazine, who was prone to call Mumia “guilty,” nevertheless still summarized at length the evidence for a police frame-up, announcing, “I’m joining the ‘Save Mumia’ movement, here and now” (Stuart Taylor, Jr., American Lawyer, December 1, 1995).

Mumia’s Case is a Primer for What Many Others Suffer

Mumia’s case is a veritable primer on the kinds of abuse suffered by the black, brown and poor in the U.S. today. What happened to Mumia foregrounds starkly what many suffer in police encounters, in dealings with prosecutors, in trial and appellate courts, and in U.S. jails, prisons and detention centers. Consider these links, below, between Mumia’s own experience and what is suffered by others in the U.S. today:

(1) Like so many others’ bodies, Mumia’s body was subjected to a brutal beating by police, on the street and in his ambulance on way to the hospital, before any determination of guilt was even attempted. He was black, brown, poor – therefore, vulnerable and beaten. Before that, he was subject to numerous cases of “stop and frisk” harassment.

(2) As seen by all too many of the poor, today, who stand before judges, the prosecutors suppress evidence that might work in favor of defendants.

(3) As experienced by many defendants of color, in Mumia’s trial the D.A. used 10-11 of its 15 “peremptory challenges” to target black jurors for removal from potential service on Mumia’s jury.  This left Mumia, from a community that was overwhelmingly black, with a “jury of his peers” that was over 2/3 white.

(4) Along with many others, Mumia has suffered harsh constraints of the Anti-Terrorism and Effective Death Penalty Act of 1996 that regulates the appeals process above the state level. This 1996 act, passed when some of Mumia’s strongest challenges to Pennsylvania’s courts were in process, limited federal powers of review over state court decisions. This effectively blocked Mumia’s chances, and those of others, in their attempts to gain relief for even their strong claims. Many of the 198 currently on Pennsylvania’s death row, and among the more than 3,000 on U.S. death rows, have been at the mercy of state courts ever since this 1996 Act.

But Mumia has suffered this limitation acutely in his state, having his appeals denied repeatedly while others’ appeals have been granted for the same claims! A federal judge on the U.S. Third Circuit Court of Appeals himself noted this fact. The repeated practice of this denial to Mumia came to be called “the Mumia exception.”

(5) Along with numerous others throughout Pennsylvania, Mumia faced a biased judge who had an unusually high number of his capital trial decisions reversed. That judge, Albert Sabo, also had been a member of a police union (the Fraternal Order of Police) and was heard in a court anteroom by a court stenographer to say of his work at Mumia’s trial, “Yeah, and I’m gonna help ‘em fry the n_____ .”

(6) Like all too many who go to trial without good defense counsel, Mumia was convicted in the absence of basic forensic evidence. The bullet that killed Officer Faulkner could not conclusively be matched to Abu-Jamal’s gun. The police also failed to perform routine tests on Abu-Jamal’s hands, which would have determined whether he had even shot a gun that night.

(7) Finally, and again like the experiences of many others in Philadelphia, Mumia’s arrest and trial conviction were secured in an era when city police corruption was rampant. Less than two years before Mumia’s trial, the Department of Justice, in an unprecedented move filed a lawsuit against the Mayor and 21 city and police officials for abuse that “shocks the conscience” (the lawsuit’s words).

The officers who arrested and later brutalized Mumia came from the 6th District, which was under yet another federal investigation for police corruption, approved by the U.S. Attorney General under Ronald Reagan.

As a result, fully a third of the 35 officers involved in Mumia’s case, including the top officer at the crime scene, Inspector Alfonzo Giordano, were subsequently convicted of corruption, extortion and tampering with evidence to obtain convictions.

--Mumia FAQ written by the Campaign to Bring Mumia Home