Elder Abuse: Incarceration Remains the Greatest Medical Threat to Mumia’s Health --The Only Treatment is Freedom 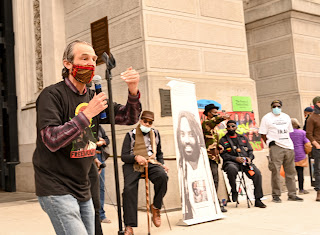 Elder Abuse: Incarceration Remains the Greatest Medical Threat to Mumia’s Health --The Only Treatment is Freedom

Mumia has survived a two vessel open heart surgery bypass graft. He is grateful for a new lease on life but his health remains fragile.

There is clear evidence that his chronic diseases of congestive heart failure, coronary artery disease, hypertension, diabetes and liver cirrhosis from Hepatitis C are the diseases of incarceration.

Incarceration is the primary social determinant of health. We know that there is documented evidence that incarcerated persons age earlier due to the physical and psychological stresses of survival. His only treatment will always be freedom.

Mumia's health remains fragile. He will need multiple medications for the rest of his life and we are working to ensure a better diet and more access to exercise as would be required for rehabilitation from recent cardiac surgery. 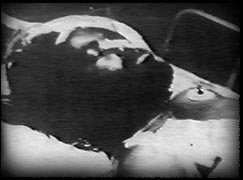 (PHOTO: Mumia in the hospital following his Dec. 9, 1981 arrest. Read Mumia's account of his arrest and hospitalization here.)

This Statement of Fact is the legal reckoning of Mumia’s guilt or innocence.  It is the foundation on which the courts proceed with future legal decisions. The presumption that Mumia violently resisted arrest and then confessed is wrong, can be easily proven wrong, and is a form of harm that denies Mumia’s humanity. Medical evidence clearly demonstrates that Mumia was first shot in the chest and was then beaten by arriving police instead of being immediately transported to the nearby hospital emergency room. The police initiated what defense witness Dessie Hightower called “an attack.” In his book, “The Framing of Mumia Abu-Jamal,” J. Patrick O’Connor summarizes Hightower’s trial testimony:

“He said that shortly after the first police officer showed up, about eight or nine other officers arrived. He then observed three or four of them striking Abu-Jamal with nightsticks while one or two others were kicking him and pulling him by his dreadlocks. He also saw the police, in carrying Abu-Jamal to the police van, ram his head into a no-parking pole and drop him to the ground.”

This police attack and deliberate withholding of emergency hospitalization was just the beginning of the state sanctioned racial violence that Mumia would continue to experience for the next 39 years. For Larry Krasner and colleagues to describe Mumia as "violently" resisting arrest or "refusing" to walk perpetuates racist trauma.

As documented by the Jamal Journal, the “hospital confession” testimony is an undeniable case of perjury that should be a national embarrassment for the 1981 FOP Police. Accounts of the “hospital confession” first surfaced during an internal investigation into Mumia's police brutality case two months after Mumia’s arrest. Gary Wakshul was one of the officers who then claimed that Mumia confessed.

However, in Wakshul’s official report from the morning of Dec. 9, 1981 he stated that the “negro male made no comment.” Wakshul was not called as a witness by Assistant District Attorney Joseph McGill and on the last day of trial, when Mumia’s lawyer attempted to bring Wakshul in for testimony, Judge Albert Sabo denied the request and told Mumia: “You and your attorney goofed.”

At Mumia’s 1982 trial, there was powerful testimony from two medical professionals that directly contradicted the perjured “hospital confession” testimony from Gary Bell and Priscilla Durham. Dr. Anthony Coletta, a respected surgeon and medical leader, testified that Mumia suffered injuries consistent with the reported police brutality, that he was with Mumia the whole time, that Mumia never shouted a confession and that Mumia could barely even speak.

Dr. Regina Culdemo also did not testify to hearing the “hospital confession.” But Dr. Culdemo did testify that she witnessed a police officer kick Mumia when he was laying on the floor of the hospital entrance.

Medical professionals are part of a web of professionals who are all in service of our communities. We are “mandatory reporters” when we observe child abuse, intimate partner violence and elder abuse.

As Mumia's medical consultant I have compelling evidence of an abuse of an elder that is deeply loved and respected by his family and community and across the world. It is our ethical responsibility to intervene when we see abuse by police, courts, and the district attorney’s office.

Indeed every “Statement of Fact” now needs full review in relation to harm done to Mumia, whose well founded fear of state violence would call for the safety of community forums so that those in power are more accountable to the harm that is done when their "Statement of Facts" harm our elders.

It is time to free Mumia, free all political prisoners, free all our elders in prison!

—Dr. Ricardo Alvarez is a physician who worked 25 years in a community health center in the Mission district of San Francisco. He brings his medical sociology training to combine with his medical training to identify the social determinants of health to include an understanding of State Violence as the single greatest threat to Mumia Abu-Jamal’s health.