Issue #2 Cover Story by Pam Africa: The Oct. 22-24 Spirit of Mandela Tribunal in NYC, Continuing to Organize for Mumia's Release, and more 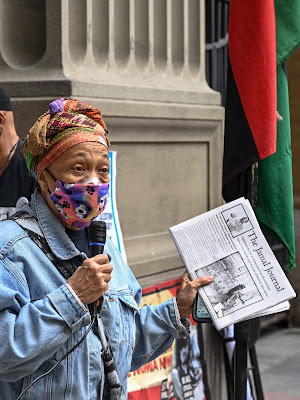 (PHOTO: Pam Africa, with the first issue of the Jamal Journal in hand, speaks outside of DA Larry Krasner's office on March 12, 2021.)

By Pam Africa, coordinator of the uncompromising International Concerned Family and Friends of Mumia Abu-Jamal

Thank you for reading the second issue of the newly-restarted Jamal Journal Newspaper.

Mumia and I are both deeply grateful for all of the support during both of Mumia’s recent health emergencies (in March and April). As Mumia told Noelle Hanrahan during his first contact visit since his April heart surgery: “I am here because people stood right with me” (read on page 26).

People power forced the prison to have Mumia properly diagnosed and treated at an outside hospital. After returning from the hospital, Mumia told us that it was the best treatment he had ever received. This was a powerful victory for the movement!

Mumia has been recovering well from the surgery, but for Mumia’s recovery to continue, it is now imperative for Mumia to have access to nutritious food and plenty of exercise. We will be mobilizing around these demands in the coming months, but ultimately, as Mumia’s consulting physician Dr. Ricardo Alvarez explains, “the only treatment will always be freedom.”

In the Spirit of Mandela Tribunal

Please help us publicize the upcoming In the Spirit of Mandela International Tribunal on US Human Rights Violations, to be held in New York City on October 22-24, 2021.

The Tribunal will be charging the United States government, its states, and specific agencies with human and civil rights violations against Black, Brown, and Indigenous people. Political prisoners will be a key issue presented at the Tribunal. Learn more at www.spiritofmandela.org

In solidarity with the October Tribunal, we are putting elderly political prisoners at the forefront of Jamal Journal Issue #2, with a focus on Sundiata Acoli, Russell “Maroon” Shoatz, Mutulu Shakur, Ed Poindexter, and Ruchell “Cinque” Magee. Please do everything you can to support their immediate release!

As our newspaper goes to print, Maroon Shoatz’s condition is severe and has worsened, so he is now seeking a medical transfer.

The MOVE family is profoundly heartbroken by the passing of our dear sister Consuewella Africa on June 16, following weeks of hospitalization due to health complications resulting from the extreme stress and emotional pain caused by recently learning that the University of Pennsylvania and the City of Philadelphia had desecrated the remains of Delisha Africa and Consuewella’s Daughter Tree Africa after they had been murdered on May 13, 1985.

On April 21, West Philadelphia activist/organizer Abdul-Aliy Muhammad’s article in the Philadelphia Inquirer exposed the University of Pennsylvania Museum’s theft of Delisha and Tree’s remains. From there, the story kept unraveling with one new horror after another. In response to the tragic death of Consuewella Africa and the traumatic news about the desecration of murdered MOVE children’s remains, our family is calling for the immediate release of political prisoner Mumia Abu-Jamal.

The Fraternal Order of Police Campaign to Kill Mumia

Today, with all of Mumia’s serious health problems, it is evident that Mumia could die in prison before actually having a new trial. That is why our Color of Change petition to DA Krasner is demanding Mumia’s outright release.

Even if the Court makes future rulings in favor of Mumia’s appeals, it will likely take several years or more before Mumia actually has the opportunity to prove his innocence at a new trial. The Fraternal Order of Police (FOP) and Maureen Faulkner are doing everything they can to delay the process even further. This is what happened with last year’s King’s Bench Appeal and then the new March 17, 2021 legal motion from Faulkner and the FOP trying once again to have DA Krasner removed from the case.

Faulkner and the FOP are purposefully making frivolous legal motions meant to delay the inevitable overturning of Mumia’s conviction. Even though the Court rejected the King’s Bench Appeal, Faulkner and the FOP were actually very successful because they put Mumia’s case on hold for almost one year. They want Mumia to die in prison before he can prove his innocence at a new trial.

On April 18, while Mumia was awaiting heart surgery, we formally challenged both DA Krasner and CNN’s Michael Smerconish because they are the two most prominent advocates for the legitimacy of Mumia’s 1982 conviction. We challenged them to make a public response to the 2010 ballistics test conducted by investigative journalists Linn Washington Jr. and Dave Lindorff, who concluded from their results that “the whole prosecution story of an execution-style slaying of the officer by Abu-Jamal would appear to be a prosecution fabrication, complete with coached, perjured witnesses, undermining the integrity and fairness of the entire trial.”

Lindorff and Washington’s 2010 ballistics test is a centerpiece of our Color of Change petition, where we cite the 2010 test as evidence of misconduct committed by police investigators and the DA’s office. We know that Lindorff and Washington’s conclusions are irrefutable. We know that Krasner and Smerconish will be unable to disprove the findings. Mumia’s conviction is indefensible and we are calling their bluff. The facts are not on their side. That is why we want Smerconish and Krasner to publicly attempt to defend Mumia’s conviction. Furthermore, Smerconish and Krasner must not deflect, must not avoid responding to the 2010 ballistics test. They need to deal with this test before we talk about any other evidence.

Linn Washington and Dave Lindorff have already agreed to be guests on Michael Smerconish’s CNN show, if he will invite them on to discuss the 2010 ballistics test. We also urged Smerconish to invite Krasner onto his show to help him attempt to defend Mumia’s conviction. After this happens, then Smerconish is free to have as many future shows on Mumia as he likes. He can then attempt to address why Mumia’s clothing that he was wearing at the time of the shooting was somehow missing from the evidence, why there is a missing fragment of the fatal bullet, and why prosecutor McGill used 10-11 of 15 peremptory strikes against otherwise qualified black potential jurors.

In another episode, Smerconish can also attempt to explain why, on the Nov. 21, 2020 episode of his show, he cited the disproven “hospital confession” as evidence of Mumia’s guilt. I urge everyone to read Dr. Ricardo Alvarez’s article in this issue, where he directly confronts DA Krasner for similarly citing the “hospital confession” in his Feb. 3, 2021 brief opposing all of Mumia’s appeals.

Until then, please read the excerpt from the Color of Change petition where we summarize the findings of Lindorff and Washington’s 2010 ballistics test (published here). You will then understand why Smerconish and Krasner have chosen not to accept our challenge.