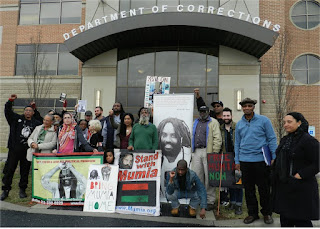 (PHOTO: Following Mumia’s emergency hospitalization on March 30, 2015, car caravans of over 40 activists travelled from Philly and NYC on April 3 to SCI Mahanoy prison in Frackville, PA, then drove 80 miles to the headquarters of the Pennsylvania Department of Corrections in Mechanicsburg, where this  photo was taken. Photo by Jamal Journal staff photographer Joe Piette.)

The story of our movement’s victory in its struggle to save Mumia’s life in 2015,  when he nearly died from Hepatitis C, is truly inspiring.  The Department of Corrections (DOC) first denied the diagnosis and, when proven wrong, denied the treatment Our movement was awesome in what we brought to that battle.  There is no question that the PA DOC and the forces that empower it in its genocidal mass incarceration rely on medical neglect and malpractice as a key tactic in their strategy.

When Mumia became seriously ill, a passionately determined movement went into high gear.  Perhaps its most dramatic show of power was at an evidentiary hearing held over three days in late December 2015 in the US Federal District Court in Scranton.  Mumia’s attorneys sued for him to get appropriate medical treatment. In the courtroom the attorneys, were combative, knowledgeable, and quick.  In the months that followed, they never missed a beat, never gave up when the DOC did everything it could to stop them.  And even after they won and Mumia was given the appropriate medicine, the lawyers sued for damages based on the harm caused by the delay in treatment. What an example of lawyering for the people.

The doctor, Joseph Harris,  an expert on Hepatitis C who had worked with underserved populations both in NYC and in Colombia, was similarly impressive.  Despite not being permitted to examine Mumia , he was able to diagnose Mumia’s condition as Hepatitis C,  explaining the skin disease which was causing Mumia such pain and sleeplessness, as related  to that condition, and educating all those in the courtroom about the major new medical breakthrough that had produced a medicine with a 90 to 95% cure rate.  He recommended this medicine for Mumia.

Dr. Harris was surely the “star witness”, obviously impressing the judge with the medical picture he was presenting.  He embodied a sharp contrast to the doctors the DOC put forward: a dermatologist who admitted to knowing nothing about Hepatitis C and whose main professional work outside of the prison was as a consultant to spas in Europe; another doctor, the DOC expert on Hepatitis C, president of a private company that provided medical services to prisons in both Pennsylvania and New York. who had numerous complaints in his record.   During NYC hearings into this company and its service to Rikers’ inmates, which ultimately led to the termination of that contract, the doctor was accused of being callous toward the prison deaths attributable to his company’s neglect and malpractice, and evasive in his responses to questioning by city council members.

Finally, the most shocking medical testimony was by the DOC’s Chief of Clinical Services.  When one of the attorneys asked him to identify his sworn declaration filed in opposition to Mumia’s Motion, the doctor immediately insisted that the signature was his but that the statement was not.  To add to the tawdry picture of the whole DOC health operation,  it turned out that Laura Neal, the DOC counsel, had apparently changed Dr. Noel’s statement: that is, she committed perjury in the court process!

Dovetailing with the legal effort, our movement continued its non-stop phone calls and e-mails to the governor, the DOC, and the prison demanding proper care for Mumia and his release so that he could get the kind of care he needed.    Demonstrations took place at the governor's office in Philadelphia and in Harrisburg and at the DOC, press conferences were held both in Philadelphia and New York, and at the DOC.  We hand delivered thousands of petitions.  We even showed up in a caravan at Mahanoy, where we stopped every visitor in a car on a busy Sunday. to alert families and friends of the danger to their loved ones who could be infected with Hepatitis C and would not be told so by the prison doctors.  We also showed up at both hospitals where Mumia was hospitalized, and even held a press conference at one of the hospitals with Mumia’s wife, brother, and supporters.  Finally, we waged an international campaign of calls and letter writing that included people such as Archbishop Desmond Tutu.

Legal filings would intersect with grassroots actions, and the letters and calls to the governor and DOC never stopped.  We were in the media and blanketed the internet.

Like in 1995 and 1999 when we made it clear that the government could not kill Mumia by legal execution, we now demonstrated that they could also not get away with a medical execution.

This struggle was indeed historic.  On January 3, 2017 Federal Judge Mariani ordered that Mumia be treated with the recommended anti-viral cure.  Never before had a US court been able to enforce the prescription of a medicine on the DOC.  After much foot dragging and cruel delays, Mumia was finally treated with Harvoni, and in May 2017 announced that he was free of Hep C!  On April 12, 2021 the Philadelphia Inquirer headlined: “5000 inmates with Hepatitis C have sued the PA prisons and now are on their way to get treatment".  What an incredible people’s victory for Mumia and all PA prisoners suffering from Hepatitis C, and a strong example for fighting such a powerful adversary as the State of PA and winning.  In the end, Mumia’s victory also affected thousands of others under PA’s jurisdiction who were granted the same right to treatment by the Governor.

--Dr. Suzanne Ross is International Spokesperson for ICFMAJ and the former longtime co-chair of the Free Mumia Coalition in NYC. 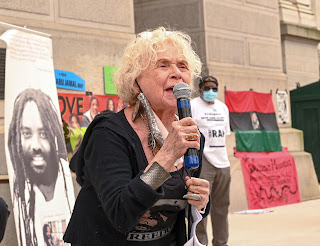