From The Archives: "I'm Waiting for Mumia to Be Well Done on the Rotisserie" --The SF Bay View National Black Newspaper exposes the FOP-led lynch mob that wants Mumia Abu-Jamal dead

(This article was originally published by the SF Bay View Newspaper on May 9, 2007 with the title: "Tyrants Hate Free Speech: Police Intimidate Mumia as May 17 Court Date Looms") 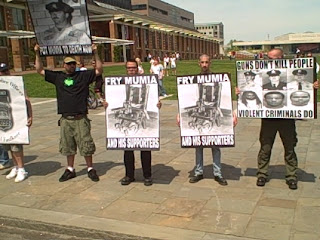 (PHOTO: At the April 19, 2008 Free Mumia protest, the Keystone State Skinheads, and other Neo-Nazi groups jointly organized a counter-protest at the Liberty Bell. Photo by Philly IMC.) 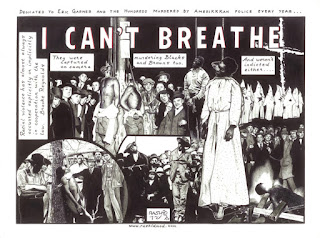 “I received nothing less than 10 or 15 death threats over the last four weeks from so-called Philadelphia police officers. I assured them that I would show up today, so they would have an opportunity to kill me. They’ve intimidated and scared folks. They’ve done what the Ku Klux Klan has always done in America: terrified Black people, poor people, immigrants and good white people” into stepping down and not confronting racism, declared Sgt. DeLacy Davis, of Black Cops Against Police Brutality.

Davis was speaking at an April 24 event in Philadelphia organized by supporters of Black death-row journalist Mumia Abu-Jamal. Widely considered to be a political prisoner, Abu-Jamal was convicted of killing white Philadelphia police officer Daniel Faulkner in a 1982 trial that Amnesty International has declared a “violation of minimum international standards that govern fair trial procedures and the use of the death penalty.”

The event was met by a counter-demonstration of over a hundred plainclothes police officers – a culmination of recent intimidation tactics by the Fraternal Order of Police, who have long been key opponents of a new trial for Abu-Jamal.

Condemning both the police counter-demonstration and the death threats he had reported, Sgt. Davis passionately declared that “the behavior and tactics” he had observed from police outside was “exactly” what he had witnessed from the Ku Klux Klan. “It is that intimidation factor that we have to address and deal with.”

Other guest speakers on April 24 criticized the recent FOP intimidation. Emphasizing the long history of resistance to U.S. racism, Philadelphia journalist Linn Washington told the crowd that “this struggle today around Mumia is not new.”

Washington then cited the 19th century Black journalist and abolitionist, Frederick Douglass, who observed, “Tyrants hate free speech.” Pointing to the large police counter-protest outside the building, he asked, “If the evidence against Mumia is as overwhelming as it is claimed to be, why is there such a shrill reaction” to someone questioning the evidence?

In his column written the previous week in the Black Philadelphia Tribune newspaper, Washington documented how the April 24 event had to change locations after police intimidation of the previous Clef Club venue. He wrote that the “anti-Abu-Jamal barrage of emails and telephone calls unleashed on the Clef Club included declarations perilously close to terroristic threats.”

Earlier that month, an April 15 hip hop concert and fundraiser for Mumia organized by youth in New York City was also forced to relocate when police intimidated the owner of the Remote Lounge. The Amsterdam News, the venerable Black Harlem-based paper, reported that “after receiving 16 citations, thousands of dollars in fines and allegedly malicious threats, the night club owner canceled the concert, two days before the scheduled event.”

Acting as the NYC Free Mumia Coalition’s legal representative, attorney Michael Tarif Warren later declared at a press conference outside City Hall that “the police engaged in a conspiracy to close this event to prevent a worthy cause.” Quoted by Amsterdam News, Warren called for “a fair hearing to air the legal improprieties” of the NYPD.

Comments posted by police officers on the infamous NYPD “RANT” blog website detailed the intimidation campaign. One post stated, “This f--ker should be dead, we should ruin this event and make life miserable for every f-ing Hollywood liberal scum liker that shows up, fry Mumia.”

Other posts threatened to send the violent Hells Angels motorcycle gang into the Remote Lounge, set up road blocks, send in undercover police, lure people with prostitutes, write up tickets, throw citations on the club and more.

After the event was forced to relocate, an April 15 thread on the “RANT” site was titled “NY Mumia Hip Hop Benefit Rally Gets Bitch Slapped.” One post under the name “Philadelphia Police Highway Patrol” said: “A sincere thank you to all of my NYPD brothers and sisters. You men and women are truly the best!”

Several other posts continued to boast of their actions with comments like “good job guys , f--k you mumia you dirty savage,” “I’m shocked, amazed, and feel a warm glow! Great work. Outstanding!!!,” “16 citations - and guess what the hits are gonna keep coming you f--k wad,” “Does anyone sell Mumia targets, so I can keep his cause alive in spirit?”

Another wrote: “Everything I know about islam I learned on 9/11.”

One post used imagery that explicitly drew the connection to the brutal history of U.S. lynchings, where Black victims of racist white mobs were literally burned alive, stating that “I’m waiting for Mumia to be well done on the rotisserie.”

Yet another post used the racist “Sambo” dialect attributed to African Americans for so many years in mainstream culture: “OH SNAP!!! da venue be changed? i hopez publik transpotation be making itz way ova dere fo me!”

Pam Africa is the coordinator of The International Concerned Family and Friends of Mumia Abu-Jamal. She’s asking people to come to Philadelphia on May 17 and “show that the whole world is watching these oral arguments.”

And she urges people to organize local events if they are unable to travel. “We need public pressure to ensure the court’s fairness.”

“I believe Mumia is innocent and am personally calling for his immediate release. However, I’ll work with anyone supporting a fair trial. By demanding a new trial, we can work with those who know the trial was rotten but are unsure of Mumia’s innocence.

“Mumia can still be executed. Further, since the Supreme Court is unlikely to hear his case, this is realistically his last chance to get a new trial. We understand that they’re getting ready to kill another Black revolutionary who has refused to bow down and suck up to his oppressor. His case represents all that is wrong with this system. We must take action now before it’s too late.”

On Thursday, May 17, the day of the hearing, San Franciscans will show the world is watching by rallying in support of Mumia in front of the 9th Circuit Court of Appeals, 95 Seventh St., near Market, at 4-6 p.m. For more information and to get involved in saving and freeing Mumia, call (415) 255-1085.