From The Archives: Linn Washington Jr. Reviews “The Framing of Mumia Abu-Jamal,” by J. Patrick O'Connor

(This article has been edited for length. It was first published as “New Frame On Framing By Police” on June 27, 2008. ) 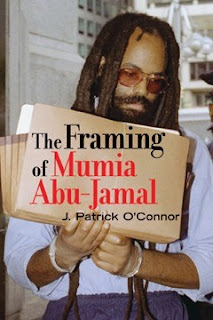 O’Connor provides solid proof for his premise from the very place considered by those convinced of Abu-Jamal’s guilt as their holy-writ: the official transcripts of court proceedings in this case sparking outrage internationally.

O’Connor read the thousands of pages of transcripts from trial proceedings in 1982 and 1995 during the research phase for his easy-to-read book “The Framing of Mumia Abu-Jamal” (Lawrence Hill Books 2008).

“From the beginning of this case, it was corrupt. It was a railroad job,” O’Connor said recently during a reading/book signing at a small venue on Baltimore Ave in West Philadelphia sponsored by the organization, Journalists for Abu-Jamal.

“I wrote the book to show not only that Mumia did not kill Officer Faulkner but to show how and why they framed Mumia,” said O’Connor who lived in the Philadelphia area at the time of the brutal December 1981 crime at the heart of this controversial case.

In 1981, O’Connor, currently editor and publisher of Crime Magazine, worked as an associate editor of TV Guide then based in a suburb of Philadelphia.

Rude rejection in Philadelphia of ever mounting evidence of Abu-Jamal’s innocence is one reason why Philadelphia’s newspaper from dailies to weeklies have ignored O’Connor’s book despite lavishing coverage on the anti-Abu-Jamal book released late last year co-authored by the widow of Officer Faulkner.

“The reception for my book has been pretty good everywhere but in Philadelphia,” O’Connor said.

“The day after my book came out I came to Philadelphia and tried to talk with newspapers. I thought they would be interested in a book with a different angle,” O’Connor said.

Hearing Abu-Jamal on the Radio

“I never heard reporting like he did. He has such a distinctive voice,” said O’Connor whose journalism career includes reporting for an international news service, editing a city magazine and owning an alternative weekly newspaper.

O’Connor’s initial interest in the Abu-Jamal case arose from what he considered the seeming incongruity of a journalist whose work he respected being arrested for murder.

“When I heard of his arrest, it didn’t seem right to me…but I bought the line because the papers in Philly had him convicted by the second day after his arrest,” O’Connor recalled during an interview last Thursday.

“The DA’s Office withheld evidence that a driver’s license application found in Faulkner’s shirt pocket shows someone else was at the crime scene,” O’Connor said during his presentation last week.

The owner of that license application told police hours after the fatal shooting that he loaned the document to Freeman.

Eyewitnesses told police that the passenger in the brother’s car shot Faulkner.

Even the prosecution’s prime witness at Abu-Jamal’s murder trial, a prostitute name Cynthia White, testified in a prior trial that there was a passenger in the brother’s car.

At Abu-Jamal’s trial, the prosecutor got White to change her prior testimony about the presence of the passenger, a tactic Pat O’Connor calls improperly deceiving the jury.

The suspicious death of Kenneth Freeman shortly after the 1985 MOVE bombing remains a mystery. O’Connor questions why Philadelphia authorities failed to fully investigate the death of Freeman who was found naked in a secluded area. Authorities closed the case on Freeman’s death as a routine heart attack.

--Linn Washington Jr. is an award-winning columnist for the Philadelphia Tribune who has covered the Abu-Jamal case since December 1981.